Having long wavered between his pro-Czech and pro-German inclinations, Hermann Kafka finally decided to send his son to a German school, most likely thinking he would thereby ensure him better prospects in life. Franz Kafka spent his first school years (1889-1893) in the German Elementary Boys’ School on Masný Trh (Meat Market) close to his home. The school was attended by children from middle-class German – overwhelmingly Jewish – families plus a minority of children from Catholic Czech homes, all of them from the Old Town quarter. The sons of the wealthier German and German-Jewish ‘City Park’ generally attended the more expensive elementary school run by the Piarists in Panská St. 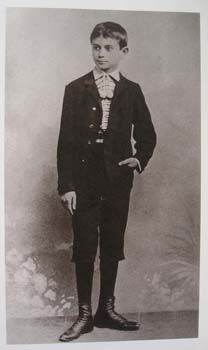 The teaching staff at Masný Trh was an ethnic mix. In first grade Kafka’s teacher was a German, in second grade a Czech and in third and fourth grades, a Jew. The standard of education and teaching was adversely affected by the large size of the classes. The class report from his first year indicated that ‘the pupil Kafka’ speaks both German and Czech. Although Czech classes were optional, Kafka attended them as his practical father intended his son to be bilingual. Franz achieved very good results at elementary school and he passed his exams ‘with distinction’. He was therefore allowed to sit the entrance examination for the general high school while he was still in the fourth grade.

Kafka’s route from home to school led right through the historical centre of the city. Starting at the ‘Minute House’ (whose beautiful Renaissance graffiti ornamentation with classical motifs has now been restored), it led past the Old Town Hall with it ancient Astronomical Clock, on which, every hour, a procession of twelve apostles culminates with the knell of Death and the rooster’s crow, followed by the chimes of the clock in the tower, past the place where the 27 leaders of the uprising of the Czech nobility were executed after the Battle of White Mountain. It then crossed the wide square – about which Kafka later wrote that such a large square should have a balustrade for crossing it – and continued along the narrow Týn Lane in the picturesque precincts of the Church of Our Lady before Týn and St. James’ Church on to Masný trh, passing the Czech elementary school and the German Commercial Academy where years later Kafka would complete an accident insurance course. There was one thing that set Franz Kafka apart from his fellow-pupils: like the children of the rich families of the ‘City Park’ in the other part of German Prague, he was taken to school by the maid-servant, the cook or the governess. Was it out of fear for the child, or because of Franz’s dislike of school towards which his attitude was one of alienation and fear rather than enjoyment and satisfaction, or was it an expression of his father’s ambition to gradually adopt the manners of the higher classes which he was resolutely striving to infiltrate? Years later, in a letter to Milena Jesenská, Kafka left a testimony to his feelings about those walks to school in the company of the cook. In the Letter to His Father and elsewhere, Kafka underestimates his educational achievements of those days and later, or attributes them to chance, and exaggerates his erstwhile fears of failure.

Franz Kafka held very radical views about children’s education particularly in the light of his own experience. According to him, parents and schools are bad educators, among other reasons because they suppress the child’s individuality.